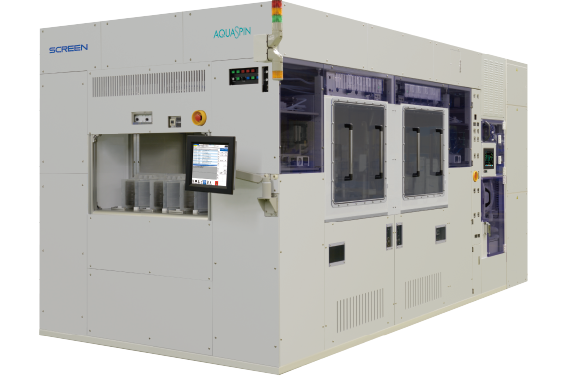 In all areas of the electronics industry, technologies and products designed to reduce environmental impact, known as green devices, are receiving significant attention. Demand has expanded especially in power semiconductors manufacturing the inverter devices that efficiently control electricity, air conditioners, trains, and hybrid/electric vehicles. In addition, usage of micro electro mechanical systems (MEMS) and back side illumination (BSI) sensors in smartphones is increasing quickly and production of these devices is also receiving attention.
In response to these market trends and requests from customers, Screen launched its Frontier project in 2010 to develop manufacturing equipment for the environmental device market. As its fourth successful Frontier project development, Screen is proud to present the SU-2000, a Single Wafer Cleaner ideally suited to green device production.

● This system inherits the basic design concept and performance of the high-end SU-3200 and is equipped with advanced processing capabilities.

● Customers can select either two or four chamber configurations, accomodating the scale of their production needs.

● When the footprint of the SU-2000 (four-chamber specification) is compared with that of our existing two-chamber MP-2000, it is just 14 percent larger.
This represents a major space saving and means the SU-2000 can be used to replace the MP-2000.

● The SU-2000’s chemical supply system is docked to the rear to improve processing control by minimizing the distance between the chemical supply source and the wafer. (All-in One concept) This decreases the footprint and increases process control.

● Due to the growing use of power devices, MEMS, TSV and BSI sensors, Screen has designed the SU-2000 to handle thin wafers.