SCREEN Graphic Solutions Co., Ltd. (SCREEN GA) has finalized development of its PlateRite Ultima 40000N series of thermal CtP systems. The high-throughput models are designed to handle standard and process-less plates containing 40 A4-size pages. With their cutting-edge GLVTM heads, they deliver an outstanding output of up to 35 plates per hour.1 The series is scheduled for simultaneous worldwide release this July. 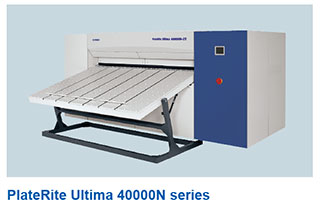 In recent years, the printing industry has been increasingly calling for the introduction of very large format (VLF) CtP systems that, in addition to high exposure quality, offer improved productivity enabling the handling of a larger number of jobs, as well as more streamlined processing and reduced operator workloads. In answer to these needs, SCREEN GA has developed the PlateRite Ultima 40000N series. Its two systems build on the exceptional throughput and versatility that have seen the company’s PlateRite Ultima 36000 and 40000 series achieve highly impressive track records since the Ultima range was first released in 2006.
Both PlateRite Ultima 40000N models feature the latest GLV exposure heads. These heads work with SCREEN GA’s proprietary clamp technologies and auto-balance mechanism to ensure stable, high-speed exposure with top quality. The lineup currently includes the ZS and ZT models, allowing printing companies to select the appropriate type for their production volumes.
While the ZS is equipped with a single 1,024 channel laser diode head, enabling an output of 24 plates per hour,1 the ZT features two of these heads, giving it a throughput of up to 35 plates per hour.1 Both systems are capable of handling single plates with sizes extending to 2,280 x 1,600 mm and can also be loaded with any two plates with sizes up to 1,060 x 1,600 mm.
These plates include various process-less types available from major manufacturers. As process-less plates do not require the chemicals normally used in the processors following exposure, they provide a more eco-friendly option and also help to reduce energy consumption and operator workloads.
The ZS and ZT are also compatible with SCREEN GA’s MA-L40000N multi-cassette autoloader, capable of automatically supplying up to 300 plates from each cassette,2 and SA-L40000N SKID autoloader, which enables direct use of a total of 600 plates2 loaded onto a pallet. Either one or two autoloaders can be connected to each CtP system as required.
As well as providing significant labor savings and improved operational stability by allowing extended continuous production, autoloaders help to reduce the damage and loading errors that were a constant source of worry while handling the large size plates for VLF CtP systems. Further support for enhanced operational reliability is provided by SCREEN GA’s TRUST Network Service, which enables advanced online maintenance and monitoring of PlateRite Ultima 40000N models.
SCREEN GA has established itself as a global leader in the CtP field and it remains firmly committed to delivering products designed to meet both existing and emerging market needs. The company hopes these products will be instrumental in supporting the long-term growth of the printing industry.