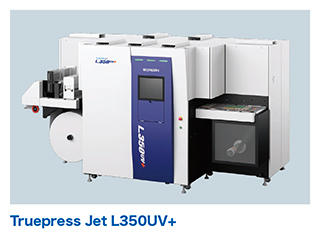 While SCREEN GA was late in entering the label printing market, the company has differentiated itself from its competitors thanks to both superior and consistent print quality, uptime and productivity, and support for a variety of substrates. These advantages led to success in developing customer loyalty and a strong reputation in the market. As a result, following the initial release of its Truepress Jet L350UV series at the end of 2013, SCREEN GA was able to ship more than 100 systems by the end of February 2018.

The Truepress Jet L350UV was first shown as a prototype at drupa, the printing industry's largest trade show, in Germany in 2012, and was commercially released as a CMYK model at the end of 2013. In the spring of 2014, white ink was additionally released for the series and in the following autumn, the JetConverter L350 digital label finishing line was also added to create a total solution for the label printing market.

Following successful promotions in Japan, Europe and North America, SCREEN GA strengthened its showroom displays to create regular demonstrations in East Asian locations such as Singapore, Shanghai and Taiwan. These efforts have effectively contributed to a continuous increase in the number of installations throughout the East Asian region.

In the autumn of 2017, SCREEN GA also released the Truepress Jet L350UV+, featuring enhanced productivity, thin substrate support and new orange ink, as well as the Truepress Jet L350UV+LM, which is compatible with newly developed low migration inks for the food packaging industry. These cutting-edge systems opened the door for a range of new applications.

SCREEN GA will continue to develop further applications and business models through product development that utilizes its unique technology and partnership development strategy. This will enable the company to offer a total printing solution to the label and packaging industry.

■ Comments by Tsuneo Baba, President of SCREEN Graphic Solutions
While we released the Truepress Jet L350UV inkjet label printing system at the end of 2013, the actual start of worldwide sales activities was around the spring of 2014, following the release of our white ink. I believe achieving shipments of 100 units in 3.5 years represents a good and stable pace, compared with our existing competitors.

The Truepress Jet L350UV was a late entry to the digital label printing field. However, we have successfully differentiated ourselves in the market thanks to our well established prepress core technologies such as color matching and detailed reproduction of text and fine lines, as well as our product reliability and user-friendly designs promoted through the integration of software and hardware development.

Our efforts have resulted in high customer satisfaction, leading to strong repeat orders and customer-driven referral marketing. SCREEN GA will continue to develop products, sales/marketing programs and support networks that quickly respond to market needs. We will also continue to listen to our customers' opinions and build trusting relationships with these customers as a first priority.